3 Pakistan rookies to watch out for in England T20Is

3 Pakistan rookies to watch out for in England T20Is The Men in Green have lost a golden chance to create history in England after they suffered a humiliating loss in the first Test match of the series.
The 2nd Test was washed out by rain, whereas the Pakistan team were saved in the third Test match by rain after being followed-on. The Test series is lost but now the focus turns to the shortest format where the 2nd placed hosts will take on the 4th placed visitors.
The selection committee of Pakistan has announced a 17-member squad for the upcoming T20 series against England.
T20I Squad: Babar Azam (c), Fakhar Zaman, Haider Ali, Haris Rauf, Iftikhar Ahmed, Imad Wasim, Khushdil Shah, Mohammad Hafeez, Mohammad Hasnain, Mohammad Rizwan, Mohammad Amir, Naseem Shah, Sarfaraz Ahmed, Shadab Khan, Shaheen Shah Afridi, Shoaib Malik and Wahab Riaz.
Out of these players, there are some young and talented players that are looking to make the opportunity count and shine for Pakistan. In this article, we will be looking at three rookie Pakistan players that are talented enough to surprise Eoin Morgan & Co. The talented batsman from Attock first came into the limelight after his terrific performances at the U19 level. He had a successful tour of South Africa and Sri Lanka before he was drafted into the ICC U19 World Cup 2020 squad.
He also had a pretty decent U19 World Cup where he scored half-centuries against Afghanistan and India, both in crucial encounters, which lead to him being picked by Peshawar Zalmi as an emerging player in the PSL-V draft and the rest is history.
Coming at no.3 for Zalmi in most of the matches, Haider played at a strike rate of 157 and his average throughout the PSL 2020 was close to 30. He showed a great array of shots and his aggression was pretty calculated as well. The Men in Green are looking for a solid and aggressive batsman at the top in limited-overs cricket and Haider seems to be that guy.
Fans back home in Pakistan cannot wait to see the talented youngster making his T20I debut for Pakistan in the upcoming series. 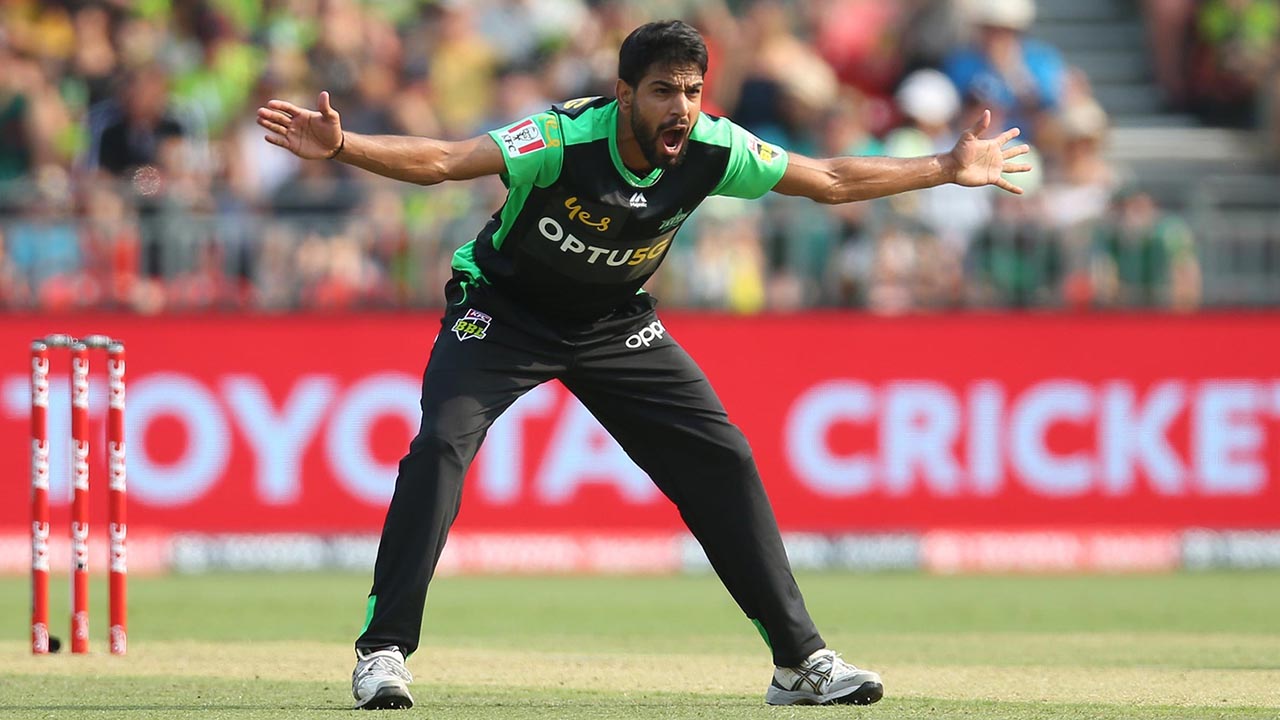 It is fair to say that Haris Rauf is one of the most talented and underexposed pacers at the international level. He has only played two T20Is for Pakistan, which came against Bangladesh at home.
He had a terrific Big Bash journey for Melbourne stars where he took a five-for and a hat-trick. He has represented Lahore Qalandars for the last two seasons after being spotted in their Player Development Program. However, Haris had an ordinary outing in the PSL-V, where he also faced an injury and was replaced by Salman Irshad, another fast bowling product of the franchise.
It seems that Rauf enjoys playing on fast tracks by looking at his performance in Australia and we're pretty certain that he's going to enjoy his bowling in the English conditions as well.
3) Khushdil Shah Left-handed batsman from Bannu - Khyber Pakhtunkhwa has been playing outstandingly well in domestic cricket from the past couple of years. The aggressive middle-order batsman Khushdil Shah was initially spotted by Peshawar Zalmi ahead of the 2nd season of the PSL in 2017, where he played in the final of the PSL 2017 but failed to make any impact.
Since then, he has worked extremely hard on his temperament and aggression. Khushdil boasts an average of 47.06 in List A cricket and he is particularly known for his hard-hitting down the order in T20s as well.
He was then picked by Multan Sultans in the PSL-V draft and he produced two magical innings for Multan in the last edition of the tournament. Khushdil's innings of 70 of just 29 balls against the Qalandars was a clear example of his capability.
The 25-year old was picked in the T20 squad of Pakistan against Australia last year where he could only take part in one match. He hasn't got his opportunity so far and we believe that the upcoming T20 series against England is a fine chance for the hard-hitting batsman to make his mark at the international level as well.