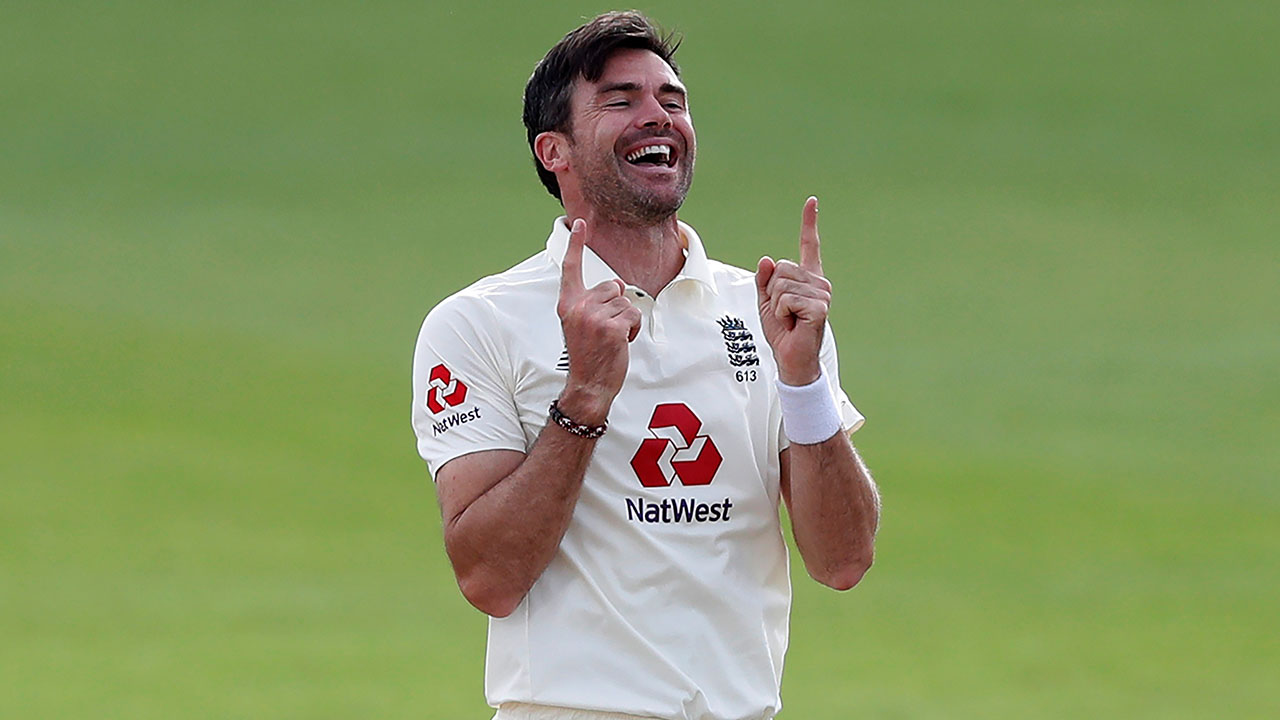 England great James Anderson has chalked up another landmark in his phenomenal career by claiming his 600th Test wicket.
Anderson, playing for the 156th time in the longest format, was at his brilliant in claiming a 29th five-wicket haul in Tests.
Already the most prolific fast bowler in the history of the game, Anderson lies fourth on the all-time list, with India leg-spinner Anil Kumble (619) next in his sights.

It meant the 38-year-old emerged with the new ball in his hand on the fourth morning, although a dropped catch behind the stumps by Jos Buttler delayed his progress - as similar errors by Rory Burns, Zak Crawley and Stuart Broad had late on Sunday.
He trapped Abid Ali lbw for number 599 and, despite the best efforts of the elements, Anderson would not be denied his moment in the final Test of the English summer.
Anderson is fourth on Test cricket's all-time list, with India leg-spinner Anil Kumble next in his sights on 619 wickets, while all-time greats Shane Warne (708) and Muttiah Muralitharan (800) are somewhat further afield.
A five-for on debut against Zimbabwe in 2003 launched Anderson's red-ball international career and he went on to establish himself as the leader of the England attack under Andrew Strauss' captaincy, with the side memorably winning the 2010-11 Ashes away from home and ascending to number one in the world.
He became England's most prolific bowler in his 100th Test match against West Indies in 2015, dismissing Denesh Ramdin to reach 383 victims and overtake Ian Botham.
Anderson has since continued to go from strength to strength, usually in alliance with his long-time new-ball partner Stuart Broad, who joined him in the 500 club earlier this season.
When Anderson removed India's Mohammed Shami at The Oval in 2018, he moved on to 564 wickets to usurp Glenn McGrath as the most prolific seamer ever.
Australia hero McGrath then laid down a challenge now accomplished.
"I have a lot of respect for Jimmy. He's been an incredible bowler for a long time," he told BBC Radio 5Live. "If he can raise the bar to 600 wickets, that's an incredible effort."
Here, we look back at six of the Lancastrian's finest performances at the highest level.
5-73 v Zimbabwe, Lord's 2003 Anderson burst on to the scene as a skiddy, tearaway paceman in limited-overs cricket, impressing in England's largely forgettable 2003 World Cup campaign. His debut in the longest format was already keenly anticipated when it came around and Anderson did not disappoint. Mark Vermeulen was bowled to become number one of 600 and the 20-year-old wasted little time in getting his name on the famed Lord's honors board.
7-43 v New Zealand, Trent Bridge 2008 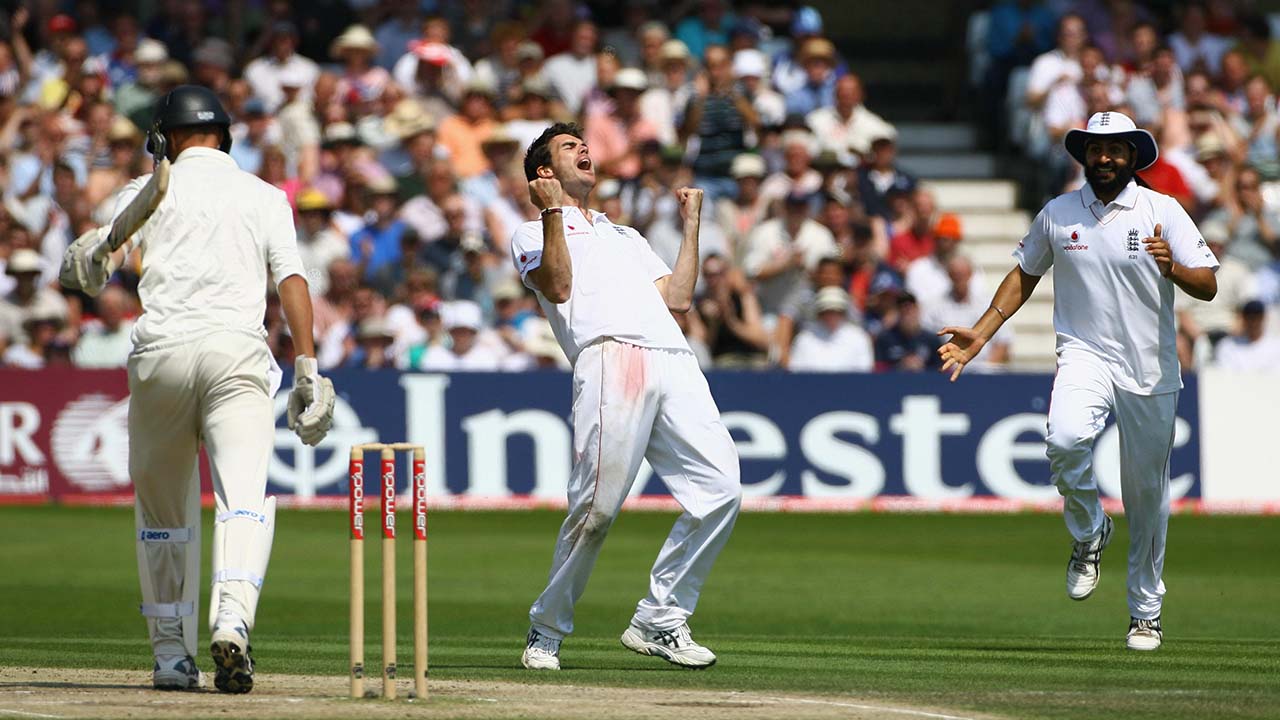 The boundless promise of those early years subsided into struggles for form and fitness, with Anderson in and out of the Test side. A turning point arrived on the tour of New Zealand in 2008 when captain Michael Vaughan entrusted Anderson and his great ally Stuart Broad at the expense of experienced new-ball duo Steve Harmison and Matthew Hoggard.
By the time the Black Caps came to England for a return series later that year Anderson's second coming was off and running. A masterful display of swing bowling in Nottingham reduced New Zealand to rubble. Then career-best figures of 7-43 accounted for each of the top seven as the tourists were forced to follow-on and England won by an innings.
4-51 v Australia, Adelaide Oval 2010 If Alastair Cook and Jonathan Trott's Brisbane run-fest to secure an opening draw in the 2010-11 Ashes put a spring in England's step, it was Anderson's stunning new-ball burst at Adelaide that set them on the way to historic success. Within his first two overs of the match, Ricky Ponting and Michael Clarke were back in the sheds with Australia 2-3. They never recovered during what proved to be an innings defeat and the Ashes were retained when Anderson led an even more emphatic demolition in the Boxing Day Test at the MCG.
3-89 & 3-38 v India, Kolkata 2012 If the 2010-11 Ashes did much to dismiss the notion that Anderson was a bowler who could only do it in home conditions, there could be no doubt after his imperious showing in India, spearheading the attack as Cook's side came from 1-0 down to claim a stunning series win. A seven-wicket victory in Kolkata settled the issue, with Anderson imperious as he counted Sachin Tendulkar, Virat Kohli and MS Dhoni among his victims. He went on to be named man of the match in the drawn fourth Test.
5-85 & 5-73 v Australia, Trent Bridge 2013 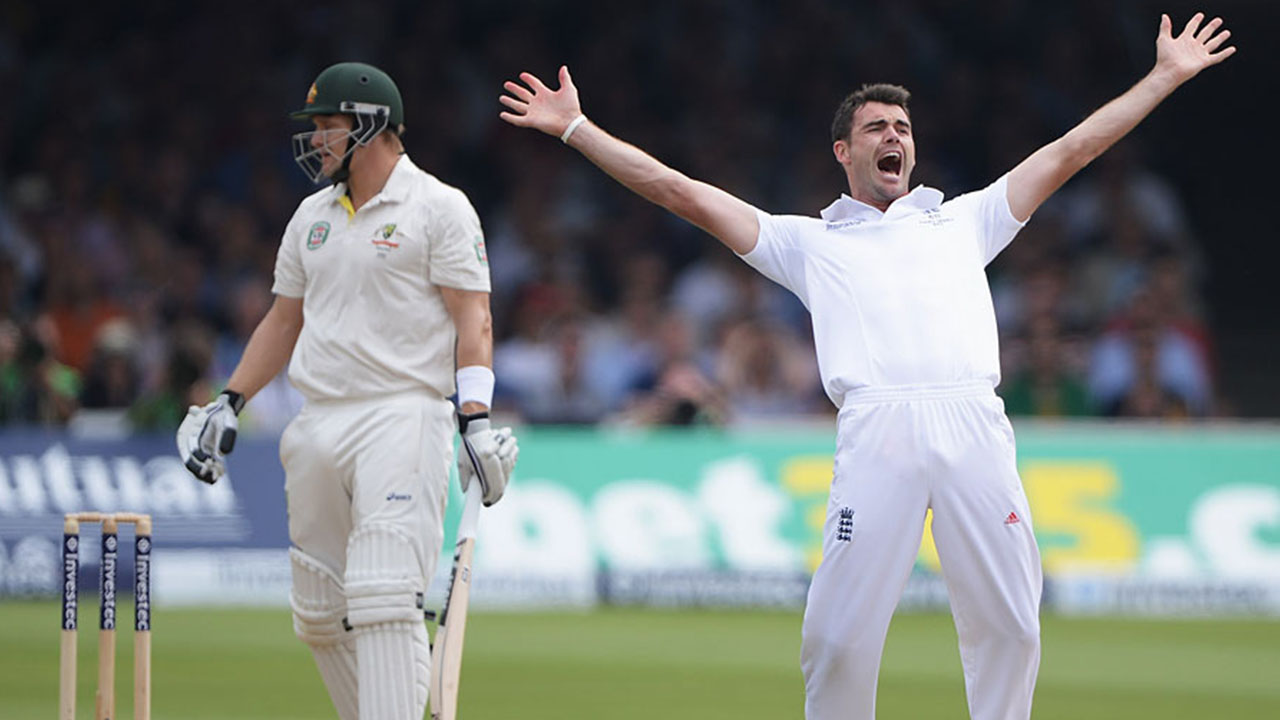 The first Test of back-to-back Ashes series went to the wire, with Australia determined to regain the urn. Thankfully for England, their main man stood tall. Anderson claimed five wickets in each innings - his delivery to bowl Aussie skipper Clarke for a duck on the first evening was an absolute screamer. As Australia closed to within 15 runs of victory on day five, it was somewhat inevitably Anderson who persuaded Brad Haddin to feather behind, getting Cook's men over the line.
5-40 v South Africa, Newlands 2020 By now 37 and established as England's all-time wicket-taker and a member of Test cricket's exclusive 500 club, Anderson went into the recent tour of South Africa with a point to prove. Injury had all-but ruled him out of a drawn Ashes series on home soil and the tourists arrived in Cape Town 1-0 down. Despite 269 all out giving him little to work with, Anderson conjured a first-innings lead for England through a display of his enduring brilliance. He ended with seven in the match as a march towards a fine series triumph began.