Pakistan have shortlisted 20 players who will be considered for selection for the three-match Test series against England, starting from August 5. The 9 players who have not been included in the squad will remain with the group and will continue to train ahead of the T20I series which follows the Tests. In this article, we take a deeper look into this pool of selected players and evaluate the overall structure of the team through statistical analyses.
Pakistan Test Squad: Azhar Ali (c), Babar Azam (vc), Abid Ali, Asad Shafiq, Faheem Ashraf, Fawad Alam, Imam ul Haq, Imran Khan, Kashif Bhatti, Mohammad Abbas, Mohammad Rizwan, Naseem Shah, Sarfaraz Ahmed, Shadab Khan, Shaheen Shah Afridi, Shan Masood, Sohail Khan, Usman Shinwari, Wahab Riaz, Yasir Shah.
The Openers
After an eternity, Pakistan finally seem to have found a settled and a reliable opening pair in Tests. Several batsmen have tried to prove their capabilities in the opening slots for the last decade or so but most of them have faded away from the limelight with the progressing time. In Shan Masood and Abid Ali, Pakistan have found some stability at the top of their order and the two, themselves, seem to enjoy batting together.
For opening pairs who have had at least three partnerships in the last year or so, the Pakistan duo has the highest average runs per dismissal as shown in the table below. This also includes their stellar 278-run stand against Sri Lanka in Karachi last year which, subsequently, became the second-biggest opening partnership in Pakistan's Test history. A slightly late bloomer as per the subcontinental cricketing norms, Abid has been around the domestic circuit for an eternity. Very few of the hard-toiling tales at the first-class level of Pakistan Cricket elevate to the worth they deserve with progressing age being an obvious aspect that is frowned upon and often shunned in this part of the world.
The 32-year old opening batsman who hails from Lahore has emblazoned his name into the history books, forever. With a ton in Rawalpindi earlier this year, he became the first cricketer ever to notch up centuries on both Test and ODI debuts.
Part and parcel of Abid's shimmering success have been his undeterred perseverance and invariable hard work. Abid's uncomplicated approach towards his batsmanship and an orthodox technique to top it up have been highly commended by former players and sporting analysts, alike. His batting style oozes traditional flamboyance and is far more fluent than haphazard.
Shan, on the contrary, has had a roller-coaster sort of a Test career, thus far. Although he has been in excellent touch in the longest format, of late, the southpaw has had issues with some technical frailties which were exposed in England when Pakistan toured four years ago. His struggles against James Anderson are well documented who has had the better of him six times in red-ball Cricket.
Shan had a decent 2019 as he was one of Pakistan's highest run-getters in the tours of South Africa and Australia. In the home series against Sri Lanka and Bangladesh, Shan notched up two terrific centuries to cement a spot for the England tour. One thing is for certain now that he looks more composed than ever to tackle the English challenge but it's a stern challenge, nevertheless, that awaits him. The Middle Three
Much of Pakistan's fate in the upcoming England series rests on the shoulders of the trio of batsmen: Azhar Ali, Babar Azam, and Asad Shafiq. As time has progressed and some renowned Pakistan cricketers have bowed out of the game, the baton of Pakistan's Test side has been passed off to the likes of Azhar and Asad. The positions that were once held by Younis Khan and Misbah-ul-Haq have now been taken up the emerging crop of young, talented cricketers including Babar. Pakistan would feel fortuitous enough to have players in their squad who boast quite a bit of experience of playing in English conditions.
Azhar Ali, the current Test skipper, is one such player and has ample amounts of experience of playing in England He has not only featured for Pakistan in three different series against England in England but has also represented the Somerset Country Cricket Club in back-to-back Specsavers County Championship seasons.
His numbers, however, have been about par - averaging just under 30 in the 12 matches that he has played for Pakistan, scoring 653 runs with a solitary century to his name. In fact, amongst the five Pakistan players who have scored more than 300 Tests versus England in England, Azhar has, by far, the worst record. Asad Shafiq, who has been around for a while too, has somewhat recorded better performances on English shores. In the 6 Tests that he has played there, Asad has registered 365 runs at an average of 36.50, including a special century at The Oval in 2016 which helped Pakistan in leveling the series.
However, much of the focus will be on Babar who has attracted immense prominence of the cricketing fraternity after rejuvenating his Test career. Since the advent of 2018, he has turned over the tables in his own merry way and become Pakistan's mainstay in the Test format, too.
Babar's stats since January 2018 are not only the best for any batsman across Pakistan but they are world-beating, too. For batsmen who have featured in at least five Test matches in these last 31 months, Babar has a staggering average of 65.47, the highest amongst this list. In his last five Test matches, Babar has notched up four 100's and two 50's. He has played only one Test inning this year. It was against Bangladesh where he scored a whirlwind 143 runs at a S/R of nearly 75. Here is a sneak-peek into Babar's year-wise batting averages and the difference is drastic between the start of his career and the last two years or so: 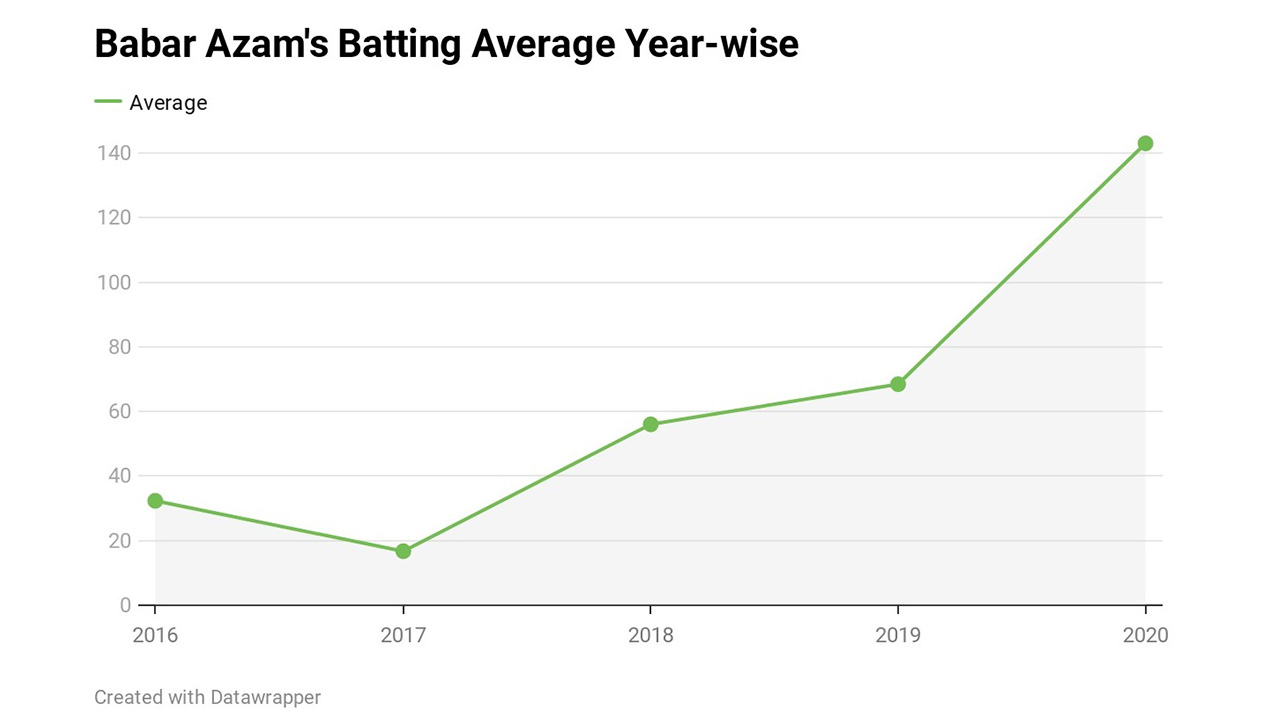 The Wicketkeepers
Pakistan have named two specialist wicketkeepers in the 20-man squad: Sarfaraz Ahmed and Mohammad Rizwan. The former has recently been called up into the national team after he was sacked from Test and T20I captaincy in October, last year. Sarfaraz was also dropped from both sides, owing to his indifferent form and fitness concerns.
It was more of Sarfaraz's poor returns with the bat that led to his axing from the Test side. He only managed 449 runs from the 11 matches that he played between 2018 and 2019, averaging around the 25 mark. His form had drastically dropped comparing to his excellent run in 2014-15. In fact, all three of his Test hundreds came in 2014 where scored at a scintillating average of 67.55. Despite his recent shortcomings, Sarfaraz is the all-time leading run-scorer for Pakistani wicketkeepers in Test Cricket, edging past Kamran Akmal's tally in his last Test in South Africa. Rizwan, on the other hand, has done well in Sarfaraz's absence. Pakistan's tour of Australia last year, in particular, went quite well for the 28-year old wicketkeeper where he made 177 runs in two Tests, at a healthy average of 44.25. Pakistan's team management have already declared Rizwan as the side's first-choice wicketkeeper in England.  He also demonstrated his good form with the bat during the first warm-up game, scoring an unbeaten hundred to push his case over that of former captain Sarfaraz. This is the first time that the rookie keeper will be playing in England, contrary to Sarfaraz who has featured in 6 Tests there.
The Pacers
As one would have expected, nearly two-fifths of the 20-man Pakistan squad consists of fast-bowlers, pacers, and seamers of all kinds. The talk of Pakistan's young fast-bowling pair of Naseem Shah and Shaheen Afridi spearheading their pace battalion in the series against England has been buzzing across the cricketing circles. The pace duo has showcased since emerging on the international scene and by garnering some excellent repute, that they can be more than a handful in bowling-friendly conditions.
Like his tall gangling frame that stretches six-and-a-half feet high, Shaheen's stature has also been elevating in the international cricketing fraternity. The 20-year old wears a sweet, child-like smile and has a harmless demeanor about him but hides a very adept and aggressive fast-bowler behind all this apparent meekness. Shaheen has 30 wickets to his name after 8 Test appearances and he has shot to prominence in such a short time that flattering comparisons between him and the likes of Wasim Akram have already started to be drawn. His rapid, intense upsurge to the top-draw has been so flummoxing to witness that it has left many heads turned in awe.
A classic right-arm fast bowler, Naseem stunned the world with his pace, swing, and his spirited run-up when he made his Test debut at just 16. In the four Tests that he has played for his country, Shah already has 13 scalps, including a five-wicket haul, to his name. Not only that, but he is also the youngest bowler ever in the history of Test Cricket to take a hattrick - a remarkable feat that he achieved earlier this year against Bangladesh. Naseem is already seen as a torchbearer for the next generation of Pakistani pacers.
Apart from the young pace prodigies, Pakistan will also have the services of some of the more senior bowlers - the likes of Sohail Khan, Imran Khan, and Mohammad Abbas. Sohail has been around for quite some time, however, he has only featured in 9 Test matches for the Men in Green. Two of these came in Pakistan's tour of England back in 2016 where he bowled exceptionally well and scalped 13 wickets.
Sohail is more of a hit-the-deck-hard kind of a bowler but he is also renowned for maintaining a steady line and length as per the surface on offer. This is, in fact, reflected in the pie chart below that depicts the percentages of his modes of dismissals in Test Cricket. Nearly 63% of his wickets come from catches. Mohammad Abbas shot to prominence and drew the national selectors' attention after he became the leading wicket-taker in the Quaid-e-Azam Trophy for two consecutive seasons. Abbas took ten wickets in Pakistan's two-Test series against England in May and June 2018 and was named the player of the series. In October 2018, in the series against Australia, he took his 50th wicket in his tenth Test match. With that, he became the joint-quickest fast bowler, in terms of matches played, to take 50 wickets for Pakistan in Tests. In the last Test of that series, he took his first 10-wicket haul in international Cricket with 5 wickets in each innings. Abbas was the first pace bowler to achieve this in feat in the UAE. Despite the drop in his form in the last 15 months or so (as illustrated by the rising line from Jan'19 onwards), Abbas is still averaging just under 21 and is 25 wickets away from the 100-wicket mark. The 30-year old will be a major threat in English conditions and will have a trick or two up his sleeve to make the Dukes dance around.